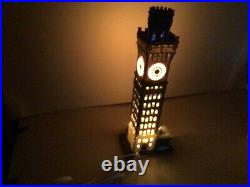 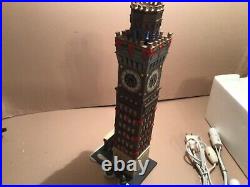 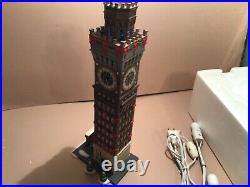 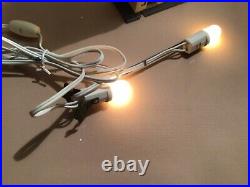 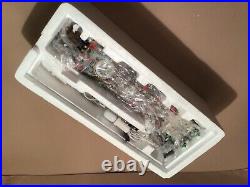 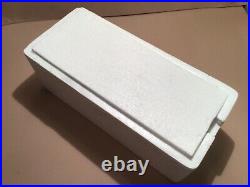 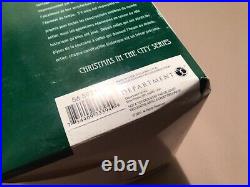 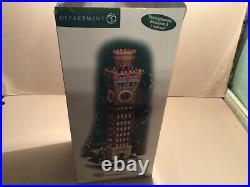 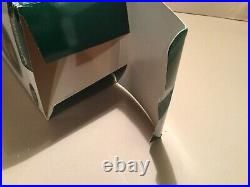 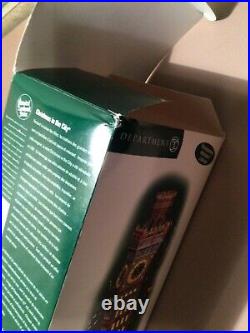 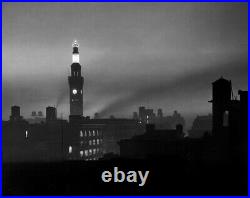 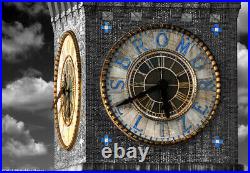 56 Baltimore Arts Tower Christmas In the City, Historical Landmark Series. The item number is 59246, and was introduced in May 2005, retired in December 2008. It remains one of the most-coveted pieces of the Dept. 56 series, and becoming hard to find in this condition. This figurine is 100% complete, and in Nr. The box is in excellent condition, as is the styrofoam liner. The top lid flap is a bit rumpled, but with no tears, as photographed. The box still has its original sheen, and displays beautifully. It does have a couple of bottom corners that are rounded, not perfectly square, but you have to look hard to notice them. The cellophane that the figurine originally came in is not perfect, but is complete and intact. The cellophane that the light assembly came in is not present. All original literature and packaging material is included, with no writing or issues, as photographed. International buyers should contact me before purchasing to determine cost. Please feel free to ask me questions, or request additional photos. Thank you for looking. Here is a bit of history of the Baltimore tower that I found on Wikipedia. It was the tallest building in Baltimore from 1911 until 1923. The design of the tower along with the original factory building at its base was inspired by the Palazzo Vecchio in Florence, Italy, which was seen by Emerson during a tour of Europe in 1900. Systems engineering for the building’s original design was completed by Henry Adams. The factory was demolished in 1969 and replaced with a firehouse. The building features four clock faces adorning the tower’s 15th floor on the North, South, East and West sides. The dials, which are illuminated at night with LED lights are 24 feet (7.3 meters) in diameter, and the minute and hour hands approximately 12 and 10 feet (3.7 and 3.0 meters) in length respectively. Upon its completion, the Bromo Seltzer Tower featured the largest four dial gravity driven clock in the world. Originally designed to be weight driven, it was electrified in 1975 and restored to the original weight drive in 2017. The word BROMO reads clockwise, and SELTZER counterclockwise, which results in the letters being located in the following positions:The tower originally had a 51 ft (16 m) Bromo-Seltzer bottle, glowing blue and rotating. Weighing 20 tons, it was lined with 314 illuminated w/ lights and topped with a crown on a clear night it could be seen from 20 miles away. The bottle was removed in 1936 because of structural concerns. The tower was virtually abandoned in 2002, but in early 2007 the Baltimore Office of Promotion and the Arts and philanthropists Eddie and Sylvia Brown worked to transform the structure into artist studios. The Bromo Seltzer Arts Tower is now home to a variety of creative artists, writers, videographers, photographers, poets, and more. The Baltimore Fire Department’s John F. Steadman Fire Station, which opened in 1973 and is situated at the tower’s base, houses BCFD Hazmat 1, Airflex 1, Medic1, Medic 23, MAC23, Engine 23, Rescue 1, and formerly Truck 2. The Bromo Seltzer History Museum opened in 2015 featuring a collection of Bromo Seltzer bottles and Emerson Drug Company marketing ephemera. The Maryland Glass Room was added in 2017 to showcase the collection of cobalt blue glass bottles made by The Maryland Glass Corporation owned by Isaac Emerson. The Emerson Bromo-Seltzer Tower was placed on the National Register of Historic Places in 1973. It is included within the Baltimore National Heritage Area. The item “Dept 56 Baltimore Arts Tower Christmas in the City # 59246 Bromo Seltzer Tower” is in sale since Thursday, June 17, 2021. This item is in the category “Collectibles\Holiday & Seasonal\Villages & Houses”. The seller is “threefries” and is located in Linthicum Heights, Maryland. This item can be shipped to United States.